Everything You Need To Know About PCP Use & Addiction

PCP, piperidine, commonly known as ‘angel dust’, is a powerful hallucinogenic drug with dissociative properties. Taking PCP can lead you to have a ‘trip’ like experience.

Phencyclidine (PCP) was originally marketed in the 1950s as an intravenous anaesthetic drug under various brand names, including Sernylan and Sernyl. However, its use in human medicine ceased in 1965, after patients who were administered the drug experienced psychotic effects.

PCP is still used today in veterinary medicine as a painkiller and tranquilizer but is no longer pharmaceutically available to humans. PCP that is abused is mostly manufactured illicitly in unregulated, homemade laboratories.

As with all hallucinogenics, there are many risks and dangers, especially when it comes to mental health. Here, Detox Plus UK looks at the effects of PCP in the short term and long term, the risks associated with use, and the signs of abuse and addiction. 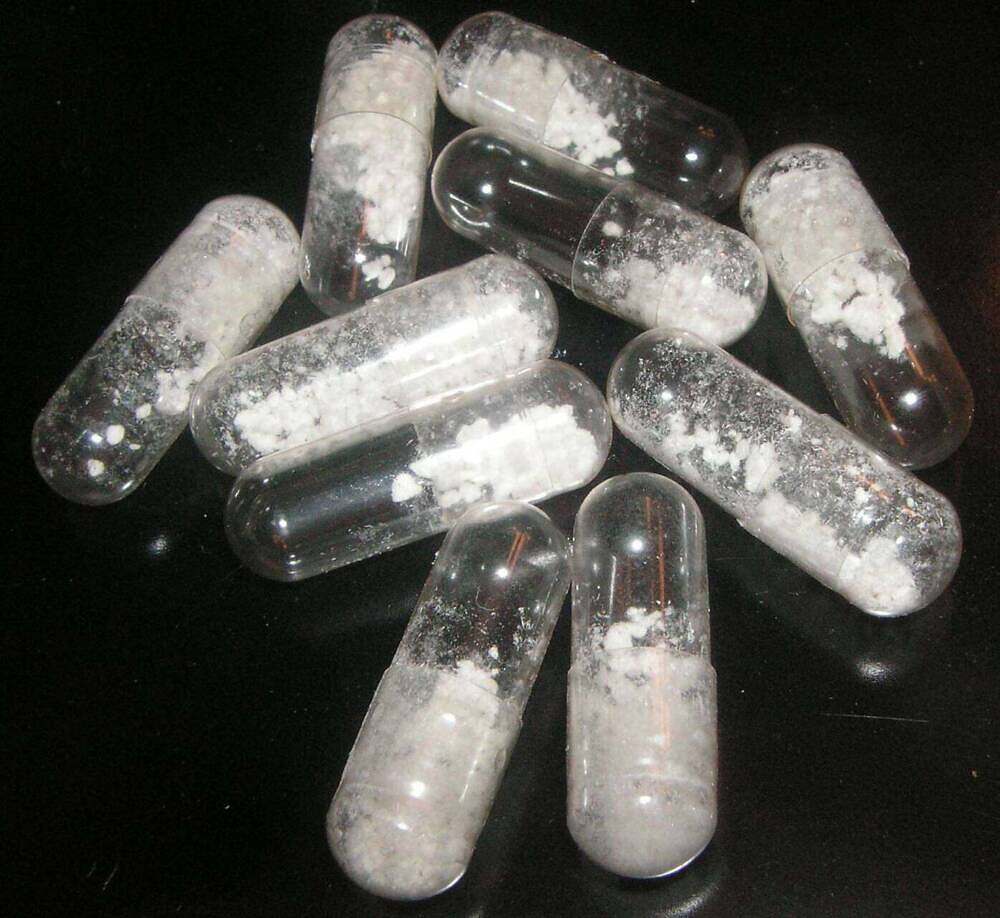 What is phencyclidine (PCP), or angel dust?

Angel dust is the common street name for the illicit drug Phencyclidine or phenyl cyclohexyl piperidine (PCP), a hallucinogenic drug that was commonly used during the psychedelic era in the 1960s for its mind-altering effects. 1

The Angel Dust drug works primarily as an NMDA receptor antagonist, which is a dissociative anaesthetic. 2

The effects of Angel Dust that are sought after by those that abuse the drug include sedation, hallucinations and euphoria.

Whilst Angel Dust is still commonly abused in America. Its use is now less common in the UK. Having said that, some drug abusers will have a preference for the effects of PCP and still manage to get hold of the drug.

The UK law on PCP

PCP is a Class A drug controlled under the Misuse of Drugs Act 1971.

Possession can carry a maximum penalty of up to 7 years in prison, an unlimited fine, or both.

Supply and production of PCP can carry up to life imprisonment, an unlimited fine, or both.

The PCP drug was originally discovered in 1926 and outlawed in the United States in 1978. 3 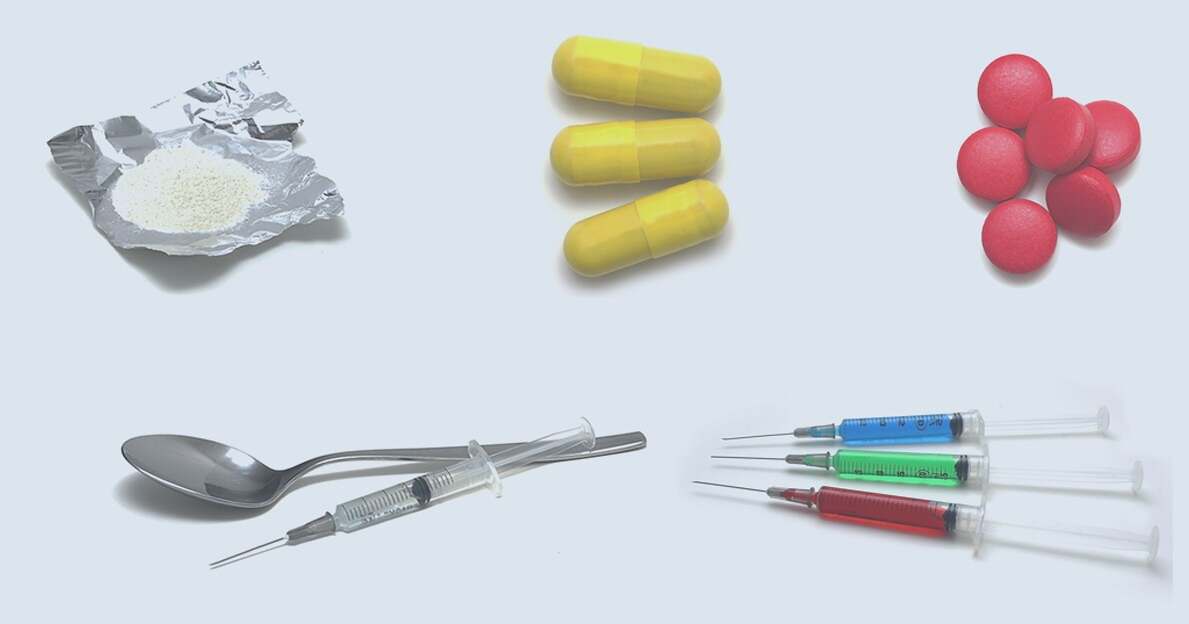 The appearance of PCP varies depending on the form and manufacturer.

Pure PCP is a white crystalline powder that is water-soluble. It comes in various colours and is available in powder, pill, tablet, capsule and an oral or injectable solution. It is also available in yellow oil.

Those who use the powdered version will usually smoke it, snort it, or dissolve it in water or alcohol and drink it.

PCP can also be administered by injection in its soluble form. PCP tablets and pills will often come in a variety of bright colours that can make them appealing to teenagers. 5,6

The effects of PCP – What does it do when you take it?

You may be interested to know what PCP does when you take it and what the effects are. The experience you have as an individual really does depend on how you react.

Some people enjoy the trippy euphoric experience. Others will absolutely hate the effects, deeply regret taking it and never touch the drug again.

What PCP does to your brain

Depending on how the drug is taken, its effects can be felt within a few minutes of smoking, snorting or injecting it, or up to 30 minutes if consumed orally.

The short term, immediate effects can last anything from 4 hours up to 24 hours, depending on dosage and the person’s individual metabolism of the drug 7

Once PCP reaches the brain via the bloodstream, it works on multiple neurotransmitter systems simultaneously.

Phencyclidine inhibits the reuptake of dopamine, norepinephrine, and serotonin. This is what causes a person to feel euphoria and many of the other sensory effects.

PCP also works by blocking NMDA receptors in the brain, inhibiting the action of glutamate. The NMDA receptors are responsible for feeling pain, sensation, emotions, learning and memory.

In higher doses, the interrupted receptors cause the brain to disconnect from normal sensory function and reality, or it can do the opposite and stimulate and excite the receptors.

The effects are extremely unpredictable, and there is no knowing how a person will react to the drug before taking it. It is the unpredictability of the drug that caused it to become an illicit Class A banned substance. 7

Taken in small doses, the effects are similar to alcohol intoxication. However, it produces very similar effects to other hallucinogenic, dissociative drugs such as ketamine, acid, DMT or LSD, and induces a psychedelic type trip in larger doses.

Larger doses can also depress the respiratory system to the point a person stops breathing.

Phencyclidine’s (PCP) short term effects on the body include:

Phencyclidine’s (PCP) short term effects on the brain and mind include: 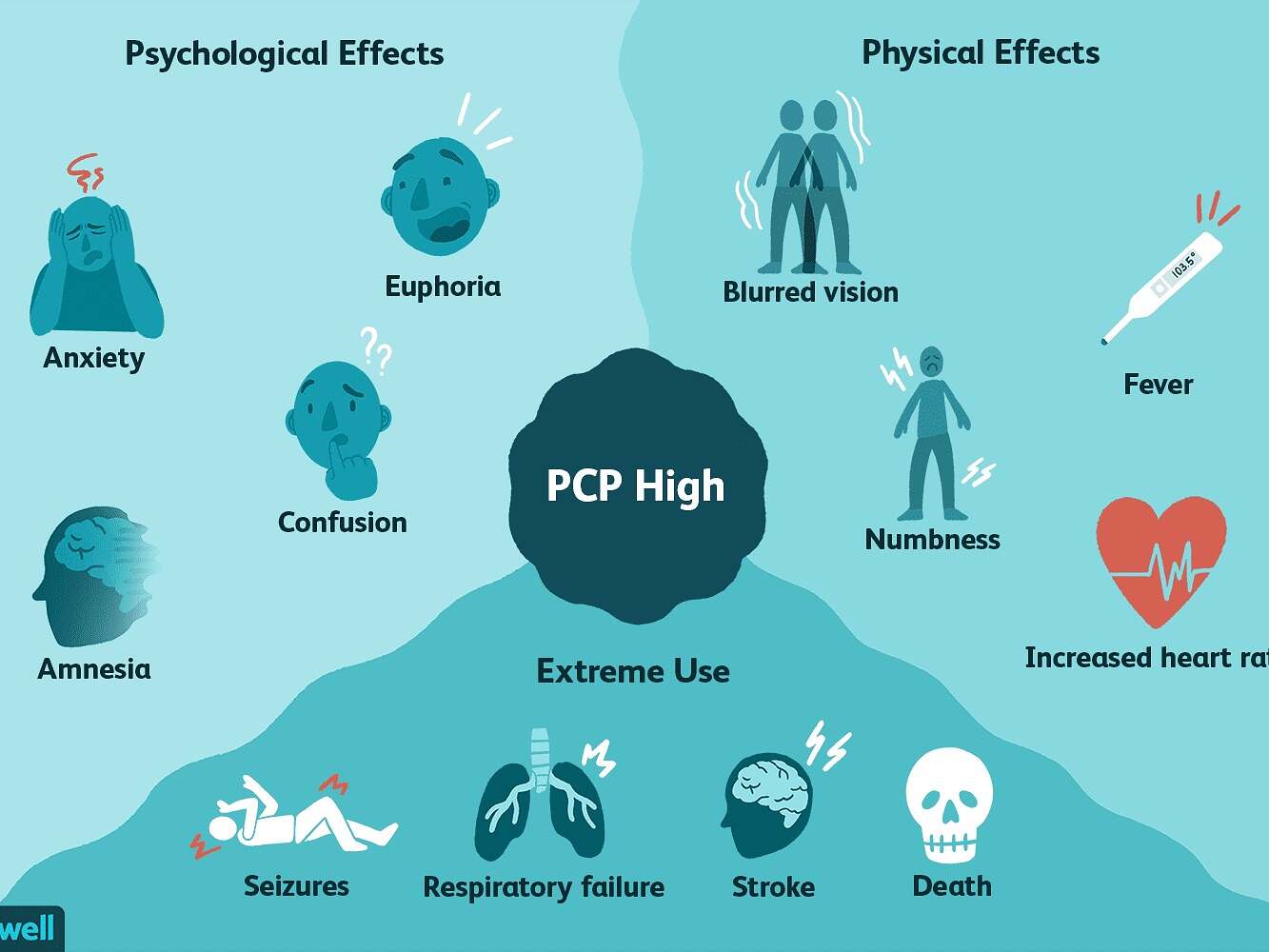 The long term effects of PCP abuse include:

These effects can last for up to a year after someone stops taking PCP. Some people with a long-standing addiction may never fully go away.

The risks of PCP

PCP is one drug that can cause a particularly traumatic condition to develop, known as Hallucinogen-Persisting Perceptual Disorder (HPPD).

Depending on the severity of HPPD, symptoms can range from mild colour, sound or shape disturbances to repeatedly reliving terrifying flashbacks as if still under the influence of the mind-bending effects. 8

Mixing with depressants such as alcohol increases the likelihood of overdose and long-lasting damage. It will also further suppress the body’s vital organs from functioning as they should.

Whilst under the influence of PCP, a person is at a much higher risk of suffering an injury or accident. This is due to an inability to feel pain, coupled with intense feelings of invincibility and superhuman strength. Throw into this mix the realistic hallucinations, and you really do have a recipe for disaster. 7

Findings have shown that a person with PCP intoxication is at higher risk of developing toxic psychosis, which can cause hostility, paranoia, aggression, and delusion in users.

Regular abuse of Phencyclidine can also result in tolerance, meaning that a person will need to take increasing amounts or mix it with other drugs to feel the desired effect.

Regular use can also put a person at high risk of developing addiction which is considered a life-threatening and life-limiting condition that requires urgent professional help.

Signs of abuse and addiction

If you are worried a loved one or family member may be abusing PCP or possibly be suffering from addiction to the drug, it is important to encourage them to seek professional help and not just ignore the problem.

Abuse and addiction can have long-lasting consequences, even once the drug has been successfully stopped.

Signs of abuse and addiction include:

A person suffering from PCP addiction will have their lives gravely impacted by the drug, as will those who care for and love them.

Addiction is a chronic and progressive, relapsing brain disorder, characterised by compulsive drug seeking and taking, and continuation despite negative consequences to mental or physical health, personal relationships, education or occupation. 9

Treatment of PCP withdrawal symptoms should ideally be provided by a registered treatment provider experienced in treating psychedelic and hallucinogenic drug addiction as well as common co-occurring illnesses.

At Detox Plus UK, we pride ourselves on providing fast, and extremely effective evidence-based treatment within our CQC registered treatment centres.

For more information on our inpatient detox and rehabilitation programmes, call our experts today for a free and confidential assessment of your individual circumstances and treatment needs.

What is DMT?- Side Effects and Health Risks

How Does Crack Cocaine Affect Your Body?