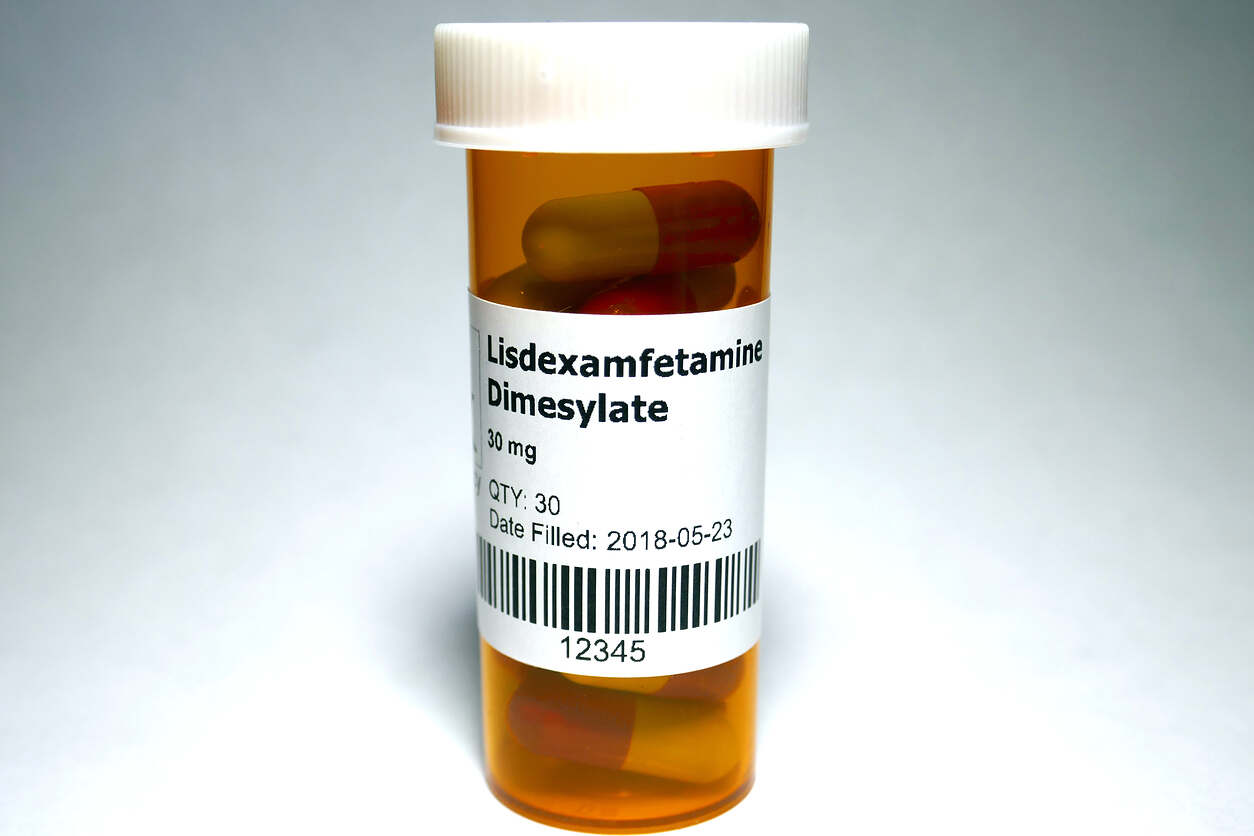 The active ingredient in the stimulant drug Vyvanse is Lisdexamfetamine and when abused can lead to addiction.

For those looking for Vyvanse UK doctors offer it as a prescription-only medication, primarily used to treat ADHD (attention deficit hyperactivity disorder) in children and adults. However, as it is a stimulant drug, it can also treat moderate to severe binge eating disorders in adults.

Amongst teenagers and young adults, there is a growing trend of abusing performance-enhancing medications such as Vyvanse in the UK. These drugs are commonly referred to as “smart drugs” as they increase a person’s focus and concentration.

Some people may also abuse Vyvanse in order to lose weight by obtaining it without a prescription.

Lisdexamfetamine was initially developed as a substitute for other addictive stimulant medications, such as Adderall and Ritalin, which have a high potential for abuse. However, Vyvanse is an amphetamine-based substance, and when misused or taken without a prescription from a medical professional, it can lead to physical dependence and addiction.

Lisdexamfetamine is the active ingredient in the brand-name medication Vyvanse, which is a prescription-only medication used to treat symptoms of Attention Deficit Hyperactivity Disorder (ADHD). The medication comes in varying dosages in chewable tablet form and oral capsule form.

This stimulant works by altering the balance of certain chemicals in the brain, such as norepinephrine and dopamine. Norepinephrine is a naturally occurring hormone and neurotransmitter that increases heart rate and blood pressure, while dopamine stimulates feelings of pleasure and reward.

By balancing these two chemicals, lisdexamfetamine helps people with ADHD concentrate better at school or work and control impulsive behaviours. However, like most stimulants, Vyvanse may cause side effects and is also addictive.

The abuse of stimulants such as Vyvanse is increasing, particularly among young adults, including college and university students. Increased use can lead to tolerance, meaning greater amounts of the drug are needed for the desired effect. This can result in physical dependence, wherein the brain and body cannot operate normally without the drug. The more a person abuses the substance, the higher their risk of addiction becomes.

The misuse of Vyvanse can lead to the development of a substance use disorder and increase the risk of overdose. It is recommended that those who are suspected of abusing Vyvanse seek professional help as soon as possible.

The misuse or abuse of stimulants such as Vyvanse can lead to addiction and various dangerous side effects and health risks.

Side effects of Vyvanse abuse include:

Much like any amphetamine-based drug, when abused, Vyvanse can lead to addiction.

Vyvanse works by increasing the amount of dopamine in the brain. Dopamine is a neurotransmitter which acts as a reward to reinforce and motivate behaviour. Individuals with attention-deficit hyperactivity disorder (ADHD) are particularly likely to benefit from Vyvanse due to their brains’ insufficient production of the neurotransmitter dopamine.

Vyvanse can be hazardous if taken more than the recommended dosage or for non-medical, recreational purposes. College students in the UK commonly misuse stimulants such as Vyvanse for the purpose of heightening concentration and their euphoric effects.

Vyvanse, as a long-acting stimulant, is less likely to be abused than shorter-acting stimulants such as Ritalin or Adderall. However, misuse or taking Vyvanse without a prescription will increase the risk of addiction.

Adderall vs Vyvanse: The differences

There are two main differences between Adderall and Vyvanse – their potency and duration of action.

Adderal is a fast-release medication with a duration of 4 to 6 hours, whereas Vyvanse has a slow-release mechanism that typically lasts for 12 hours. This means that it can be administered once a day, whereas a person on Adderall may have to take the medication up to 3 or 4 times a day.

The other main difference between these two ADHD drugs is that Adderall contains a combination of 4 different types of amphetamine salts. Vyvanse only contains one amphetamine salt, which is Lisdexamphetamine.

Adderall is known to be more potent than Vyvanse and has a higher potential for abuse. Nevertheless, any stimulant medication can be abused, and Vyvanse is no different. Abuse of Vyvanse can lead to tolerance, dependence and addiction.

The Signs of Vyvanse Addiction

The signs of Vyvanse addiction can become apparent when a person starts to lose control of their use and spiral into addiction.

Symptoms of Vyvanse/Lisdexamfetamine addiction include

This is by no means a comprehensive picture of what Vyvanse addiction looks like. However, any marked change in behaviour or appearance should not be ignored. It indicates that a person is struggling.

Someone who is addicted to Vyvanse or who is abusing it will experience a crash after use. During a crash, when the effects of the drug wear off, a person may become excessively sleepy, lethargic or irritated.

It is not advisable to consume alcohol while taking Vyvanse, and prescribing doctors will warn against it. Combining Vyvanse and alcohol can produce an adverse reaction that may lead to heart problems and other health complications.

Long-term use of Vyvanse can also increase the risk of cardiomyopathy, a heart muscle disease that makes it more difficult for your heart to pump blood throughout the body. Cardiomyopathy can lead to heart failure. Excess alcohol use can also cause high blood pressure and cardiomyopathy, as well.

Not only can mixing alcohol and Vyvanse increase the risk of developing cardiomyopathy, but the combination of the two is also riskier in those with preexisting heart health conditions.

The risks of mixing alcohol and Vyvanse: Increased risk of addiction and overdose

Not only does Vyvanse addiction and alcohol present some immediate health risks, such as alcohol poisoning and heart problems, but it also has some real long-term health complications.

As Vyvanse is a stimulant and alcohol a depressant, the two can cancel out each other’s effects. This makes it more likely for you to drink more alcohol than you usually would, as it will take more for you to feel drunk whilst taking Vyvanse. You may also be tempted to take more.

Signs of Vyvanse overdose include:

Vyvanse overdose can be fatal. If you spot the signs in someone else or feel you have taken too much, contact your local emergency services immediately for help.

If you frequently abuse both together, you will be at a high risk of developing an alcohol and Vyvanse addiction (dual addiction) and of overdosing.

Dual addictions are not only more high risk in terms of mortality but are also more complex to treat. Alcohol addiction withdrawal symptoms can be life-threatening, especially when another substance is involved. However, recovery is completely possible with the right medical and therapeutic treatment.

Any drug that increases the levels of dopamine within the brain has the potential to be addictive.

When Vyvanse is taken for a prologued period or is frequently abused, the brain eventually stops producing its dopamine. Instead, it becomes reliant on the drug to feel any pleasure. When this happens, a person will need to take Vyvanse to feel normal. Without it, they will experience Vyvsnase withdrawal symptoms and will feel lethargic, depressed and irritable.

Although Vyvanse withdrawal symptoms will diminish over time and with continued abstinence, the initial period of stopping the drug can be extremely challenging as the body and brain will crave it. This can lead to a vicious cycle of repeated relapse.

When a person is addicted, their withdrawal symptoms will be intensified due to the frequency and dosage they have been using. Their brain will also have rewired to seek Vyvanse as their primary source of dopamine.

Undergoing a medical Vyvanse detox within a CQC-registered rehab facility can successfully manage these withdrawal symptoms and allow the brain a chance to recalibrate and function without the need for the drug.

If you or someone you love have attempted to quit Lisdexafetamine only to relapse, a rehabilitation programme will not only help you to stop the drug but will also help you to stay stopped.

One of the common side effects of stimulant medications is that they can increase a person’s desire for sexual activity. This can prove to be problematic, especially in a person with addictive tendencies.

A person may initially abuse Vyvanse to increase sexual performance and desire. However, take the drug away, and the desire disappears. It is a short-term fix for a long-term problem. Because of this, a person can become reliant on Vyvanse, especially if they have addictive tendencies. What commonly starts out as an experimental phase can snowball into an addiction, whereby a person can become addicted to both Vyvanse and to sex.

Vyvanse addiction and sexual addiction can both be treated within the same treatment episode within one of our CQC-registered treatment centres.

How rehab can help with Vyvanse Addiction

Our treatment centres provide a safe space within a clinical yet friendly setting. We can assess the severity of your Vyvanse addiction over the phone and help you to immediately access the treatment programme you need to get well.

All kinds of people can become addicted to amphetamine drugs such as Vyvanse, and many have an underlying co-occurring mental health or emotional disorder.

Any underlying mental health illness that you have must be treated simultaneously within the same treatment period. This drastically reduces the chances of a relapse of either disorder.

By attending one of our inpatient rehab programmes, you will receive the following:

Many of our facilities also offer a comprehensive, holistic nutrition and fitness programme and a family programme. We believe in treating the mind, body and spirit of each of our guests to achieve the best treatment outcome. There will also be periods of rest, a selection of complementary therapies and enjoyable activities to participate in.

In our vast experience of treating addiction, this illness doesn’t just happen by accident. More often than not, a person becomes addicted to a drug or alcohol as they cannot cope with life or their emotions. Because of this, it is essential to unearth and heal the root causes that are the driving force behind a person’s addiction. We achieve this through several different evidence-based therapies and, where necessary, medication.

When people develop a Vyvanse addiction, they rely on the drug to socialise, function and perform. Their sole purpose in life becomes centred around

getting and taking the drug. Once the drug or drugs have been safely stopped, they often fear how they will manage without them. This is why learning new, healthy coping strategies is paramount to recovery.

Our detox clinics and rehabs introduce our guests to proven recovery-based programmes where they can find support and connection with like-minded others. We find that this is an essential part of the ongoing recovery process.

Drug and Alcohol Rehab in London