If you or a loved one are looking for a cocaine rehab in London, Detox Plus UK can help you select the rehab that is best suited to your individual treatment needs, location and financial budget.

As a leading authority on cocaine rehabs and cocaine detox clinics in the UK, Detox Plus UK only work with the most reputable CQC registered treatment centres for alcohol and drug addiction in and around the London area.

Our addiction treatment experts regularly take calls from family members and individuals who have a concern around problematic cocaine use. Cocaine is extremely addictive and dangerous, and it can cause numerous physical and mental health problems for an individual that uses it frequently.

It is important that if you or a loved one are struggling with an addiction to cocaine that professional help is sought; very few are able to overcome addiction by themselves. Not seeking help can tragically prove to be a fatal mistake.

The Dangers of Cocaine Use in London

London being the party capital where drugs and alcohol are accessible 24/7 can lead many Londoners into trouble with substance misuse. What may start off as a bit of recreational fun can potentially turn into a full-blown life-threatening addiction.

There have been numerous police reports confirming that cocaine seized in the London area has been contaminated with the highly potent narcotic fentanyl. This makes the effects of taking contaminated cocaine highly unpredictable and potentially lethal.

In 2017, cocaine deaths reached an all-time high, with a record number of 432 deaths being attributed to this deadly class A drug in England and Wales alone. Equivalent to a staggering 4000 per cent increase since records first began in 1993. 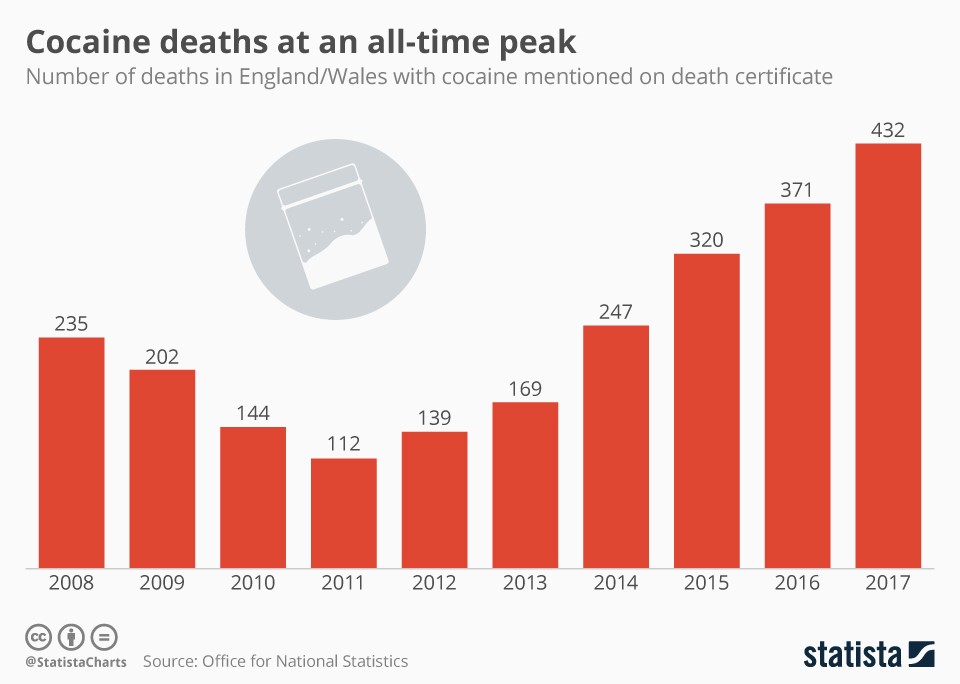 Cocaine recorded deaths do not distinguish between crack cocaine and powdered cocaine. Crack cocaine is a purer form of cocaine that delivers a more powerful “punch” but is shorter acting. Unlike cocaine which is usually snorted, crack cocaine is normally smoked from a pipe and comes in rock form.

Cocaine Is Stronger and Cheaper Than Ever Before

The National Crime Agency has found cocaine in London to be at around 54 per cent purity – this is the highest it has ever been. With more people using cocaine, rival drugs gangs in London city have lowered their prices to try and secure wealthy clientele.

Cocaine today is the second most commonly used drug, cannabis being the first. The drop in the cost of cocaine has made the drug more accessible and fuelled a huge rise in cocaine sales.

The Crime Survey for England and Wales estimated that 875,000 individuals used cocaine in 2016. This shocking rise in cocaine use has no doubt contributed to the spike in recorded cocaine-related deaths.

These statistics taken from the Office of National Statistics (ONS) are of extreme importance and emphasise just how dangerous cocaine is. Cocaine is not only cheaper and more readily available, but it is also much stronger than it was ten years ago. This has resulted in more deaths and cocaine-related hospital admissions

The Impact of Cocaine and Other Drugs on London’s Hospitals

As cocaine use has gained in popularity, London’s hospitals have seen a notable surge in drug-related mental health admissions in recent years.

Frequent cocaine use can cause mental health illnesses such as addiction, anxiety, depression and psychosis.

Data taken from NHS Digital shows drug-related mental health hospital admissions in London have risen each year consecutively since 2013/14 – where there were 10,679 admissions, to 13,155 admissions in 2016/17.

In addition to causing mental health problems, cocaine also carries severe physical health risks. ONS reported that In 2016-17, 12,000 people were admitted to hospital with cocaine-related disorders. In 2007-08 this number was just 5,148.

London was named the in 2014 and 2015, with London residents releasing the most cocaine into wastewater per person out of all the European countries. In 2016 the European Monitoring Centre for Drugs and Drug Addiction positioned London second to Antwerp for having the most problematic cocaine use.

Historically cocaine use has been prevalent amongst London city’s financial traders. Cocaine use and addiction is regularly overlooked by the company’s management with their employees taking the powerful stimulant drug to enhance their working performance on London’s trading floors.

Can Cocaine Kill You?

Is Cocaine an opiate?

Repeated use of cocaine changes the brain’s reward system. This change tends to happen quite quickly with frequent cocaine use as the drug is so powerfully addictive. Eventually, an addicted brain will seek cocaine constantly over any other healthy reward – despite negative consequences to the individual’s physical health, mental health, social life, career, significant relationships and financial security.

A cocaine-addicted individual will need to take more and more cocaine in order to feel any pleasure at all. Without cocaine, the brains normal healthy activity is dramatically reduced. A cocaine addict will eventually become very depressed, with overriding feelings of anxiety and hopelessness.

If you want to stop taking cocaine but find you are unable to stop, or unable to stay stopped for long, it may be that you are suffering from an addiction to cocaine. That being the case you will likely need professional addiction treatment for cocaine in order to recover.

Cocaine addiction is an illness and not a choice. You may have started out choosing to take cocaine and benefiting from its effects, but once an addiction has developed the power of choice is lost.

Cocaine addiction is a chronic, progressive life-threatening brain disease that requires very specific professional treatment. Without treatment a cocaine addict will only get worse over time – Taking ever-larger amounts of cocaine, neglecting their own wellbeing and taking bigger risks whilst intoxicated. We cannot emphasise enough how important early intervention is.

There is an abundance of private cocaine rehabs in London, and it is wise to seek advice before choosing which one to attend. The best-suited cocaine rehab will be dependent on individual treatment requirements, social needs, mental health treatment needs, finances and preferences.

Cost of Cocaine Rehab in London

The cost of cocaine rehab in London varies tremendously depending on the type of rehab you want and the duration of your treatment programme. The various types of private cocaine addiction treatment that we offer include bespoke treatment programmes within:

Cocaine rehab can be expensive and so as a life-saving intervention naturally you will want the best cocaine rehab available for your money. Detox Plus have in-depth knowledge of each of the London cocaine rehabs that we work with. We can talk you through the various treatment options available and help you to decide which treatment programme would work best.

Weighing up the cost of cocaine rehab against heavy cocaine addiction, you will save more than just your life by attending an inpatient treatment programme. Cocaine addiction has been known to cost people hundreds of thousands of pounds financially, as well as their home, their career, their social life, their physical well being and their mental health.

For more information on the cost of cocaine rehab in London, please call and speak to one of our friendly addiction treatment experts who will be able to help you access affordable cocaine treatment in your area.

Do you need urgent admission to a cocaine rehab in London today? If so, please call Detox Plus UK now. We are able to facilitate same-day cocaine rehab admissions and cocaine detox; we appreciate that most individuals will only ask for help in a time of crisis and we aim to make the process as seamless and stress-free as possible for all concerned.

Detox Plus UK specialises in providing exceptional evidence-based addiction treatments, and service will do all we can to ensure that you or your loved one access the best cocaine addiction treatment available in London today. Furthermore, we can take care of all of the necessary arrangements, provide you with all the information you need and arrange a full aftercare package to follow on straight from inpatient treatment.

We are passionate about saving the lives of addicts, and we will go that extra mile to ensure that you and your family have complete confidence in your chosen addiction treatment programme.

Drug and Alcohol Rehab in London