Identifying black tar heroin - What it is, its risks & effects | Detox Plus UK

Black tar heroin is easy to identify as its appearance is the same as the black tar used for roofing. It also has a very similar consistency to black tar and will smell of vinegar.

Black tar heroin differs in colour and texture from the more commonly available powdered heroin, which is white or brown in colour. [3]

If you are worried someone you care for is using black tar heroin, this article will help you to identify if they are, and what steps to take next.

Likewise, if you are using black tar heroin, or thinking of trying it, we hope that this article will help you to reconsider your choices in drug use, or ask for help. 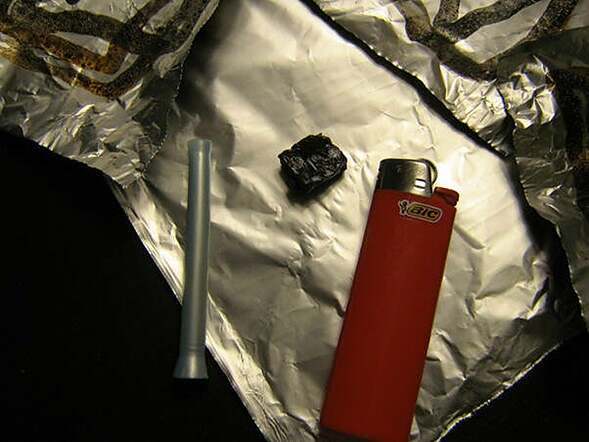 What is black tar heroin?

Black tar heroin is a specific type of heroin that has a black/dark brown colour and is very sticky in its consistency. [1]

If you find a black, tar-like object wrapped in clingfilm, it could be black tar heroin.

Any form of heroin has the potential to cause an overdose; especially if injected and especially if a person has a low tolerance to strong opioids. [2]

The primary source of black tar heroin is in Mexico. Where drug cartels are responsible for the mass exportation of the drug into other countries around the globe. 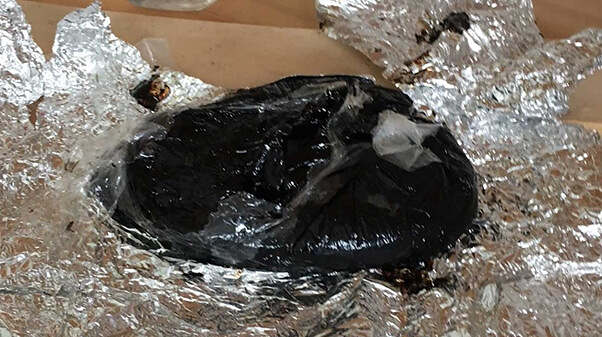 Black tar heroin use is most popular in Florida in the United States.

Whilst black tar heroin is equally as potent as other types of heroin it is less pure and will have a strong smell of vinegar.

All forms of heroin are derived from morphine, a very powerful opioid painkiller. Once heroin is ingested the body converts it back into morphine.

For this reason, deaths associated with morphine and heroin can not be separated. Toxicology reports can only identify the morphine, regardless of where it was derived from.

How is it used?

Most people that use the drug will either inject it or smoke it.

Insufflation of black tar heroin is uncommon due to the drug causing acute irritation to the nasal lining. If it were to be used in this manner, the drug is dissolved in water and placed into a spray bottle that is then sprayed up the nose.

“As it can be dissolved, many who smoke the drug will progress to injecting once they develop a tolerance.”

Injecting any form of heroin carries additional risks, including the transmission of bloodborne viruses and a substantial risk of overdose and death.

The easiest way to spot if someone is using the drug (or any form of heroin for that matter) is to find drug paraphernalia. 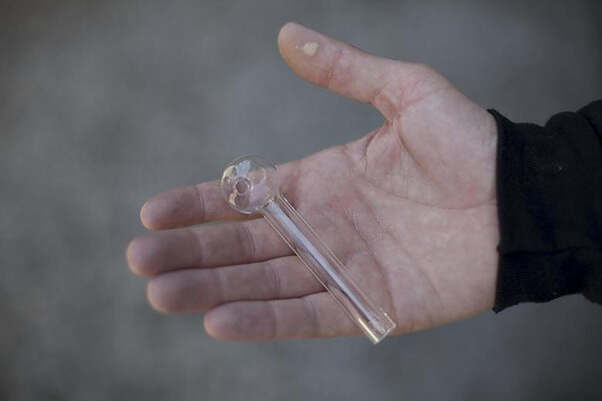 When injecting any drug, the drug will enter the bloodstream and reach the brain more quickly in unfiltered form.

The effects of the heroin dosage administered cannot be stopped once injected. Unlike smoking the drug, where you can decide if you’ve had enough.

Injecting black tar heroin is the primary cause of deaths associated with this illegal Class A drug.

The effects of black tar heroin include:

It is the euphoric effects of the drug that users seek. However, as with all drugs, there are side effects.

Side effects of black tar heroin include: 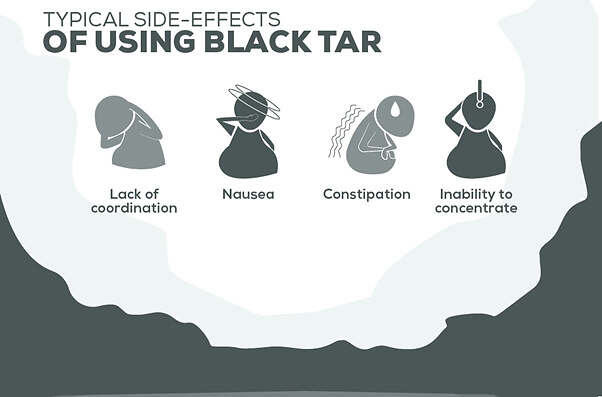 Regularly using the drug will likely lead to drug dependence and drug addiction. This is one very potent and addictive drug.

Because of the euphoric effects that heroin produces, only a few people will try it once or twice. In the majority of cases, the euphoria is so desirable that users quickly become hooked on the way taking heroin makes them feel.

As heroin is an opioid, it has the ability to quickly lead to opioid dependence. Once you are dependent on the drug, you will need to take the drug just to feel normal.

Aside from the obvious health risk of overdose, there are other risks associated with the drug that should be carefully considered.

Injecting can lead to hardening and narrowing of the veins, and an extremely dangerous condition known as venous sclerosis. This can cause the veins to become unusable and more prone to infection. Users then have to move on to more risky injection sites to get their hit.

High-risk injection sites include the neck or groin, both of which can have the immediate effect of death.

Heroin was responsible for the vast majority of drug-related deaths across the UK in 2019. 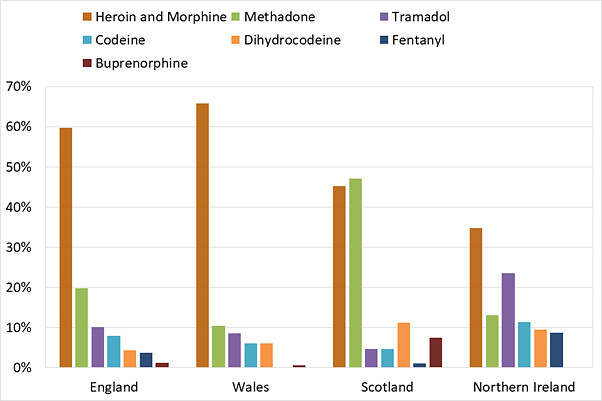 The risks of Black tar heroin – Paying for heroin with a limb!

Another hazard of injecting is the easy transmission of bloodborne viruses including HIV and bacteria. [4]

Bacteria infections can reach life-threatening proportions if not treated quickly and can lead to amputation, botulism, paralysis and death. [5]

Those that are addicted to heroin are not well-known for taking care of their health. Bacterial infections spread very rapidly, especially in a person that has low immunity, health complications, or is suffering from malnutrition –  conditions that are all commonly associated with heroin addiction. [6]

“Smoking black tar also has its risks. Lung capacity and function can become compromised due to the toxic nature of the drug. This can then lead to pneumonia and other lung-related illnesses.”

Aside from the physical risks, there are also mental health risks associated with heroin use. A person that becomes heroin-dependent will likely feel very trapped, alone and hopeless. They will likely be afflicted with severe depression and anxiety and are at a higher risk of being exposed to trauma.

If you or a loved one are struggling to stop black tar heroin, professional help is only a phone call away. Contact us to find out more about our heroin detoxes and rehabilitation programmes. You can also speak to us live online in our live chat.

If you suffer from heroin dependence, withdrawal symptoms can be very severe and even dangerous.

If you have an addiction to black tar heroin, quitting the drug, on its own will not be enough. You will be highly susceptible to relapse. A heroin relapse puts you at extremely high risk of overdose and death.

Suffering from any kind of addiction is considered life-threatening. Yet there is a certain urgency that goes hand in hand with heroin addiction. This is due to heroin’s extremely high mortality rate and high relapse rate in those that have untreated addiction.

Thankfully, you can get well from heroin addiction and make a full and lasting recovery with the help of a tailored detox and rehabilitation programme.

Advanced medications are also available that can assist your ongoing recovery and help to diminish withdrawal symptoms and heroin cravings.

Call or chat with us online to find out how we can help you to become free from heroin.

Black tar heroin in the UK

In 2018, an alert was sent out to the public, warning of the dangers of black tar heroin and its increasing use in Wales.

Andrew Davis, an outreach worker for Swansea’s homeless shelter at the time, was quoted as saying:

​​“This is what is now hitting the streets of Swansea. It’s called Black Tar Heroin, and it’s the heroin dealers’ way of getting back addicts who have switched to the cheaper crack, by selling this more potent drug at a cheaper price, but the consequences can be seen here.”

Swansea saw a huge increase in hospital admissions relating to the use of black tar. Mr Davis added:

“We have also had a massive increase in amputations, I had thought it was the fact that people were injecting crack and heroin together, when in fact it was black tar”

Helping a loved one

If you have a family member who is struggling with any heroin addiction, you can call us for free advice on how to broach the subject with them.

We will also advise you of the treatment options that are available for heroin addiction and support you in supporting them to get well.

Addiction causes lasting changes in the brain, so it’s not quite as simple as stopping the drug with the aid of a detox. The brain needs to be recalibrated and nurtured back to health with the assistance of evidence-based treatments and therapies. We also offer family therapy to help with the overall healing process.

Heroin addiction has an extremely high mortality rate, so it is important to act quickly if you wish to help a family member or friend.

Your call will be strictly confidential and you can be assured of our absolute discretion and professionalism right from the very start.

Take our free assessment – What to expect from calling us

We understand that picking up the phone can be a very scary prospect. You might be frightened that someone will somehow find out about your addiction to heroin, or that you will be yet railroaded into a heroin rehab centre.

Let us reassure you.

By calling us you will be put through to one of our friendly team members, all of whom are experts in addiction treatment. They understand exactly how you feel, as they have overcome addiction themselves!

Following a free and confidential assessment of your current drug use and a history of your health, a treatment plan that meets all of your treatment needs will be recommended. Whether you decide to follow through with that treatment and allow us to help you further is completely up to you!

Can heroin addiction be cured?

How Much Morphine Is Safe To Take?

Can heroin abuse cause diabetes?