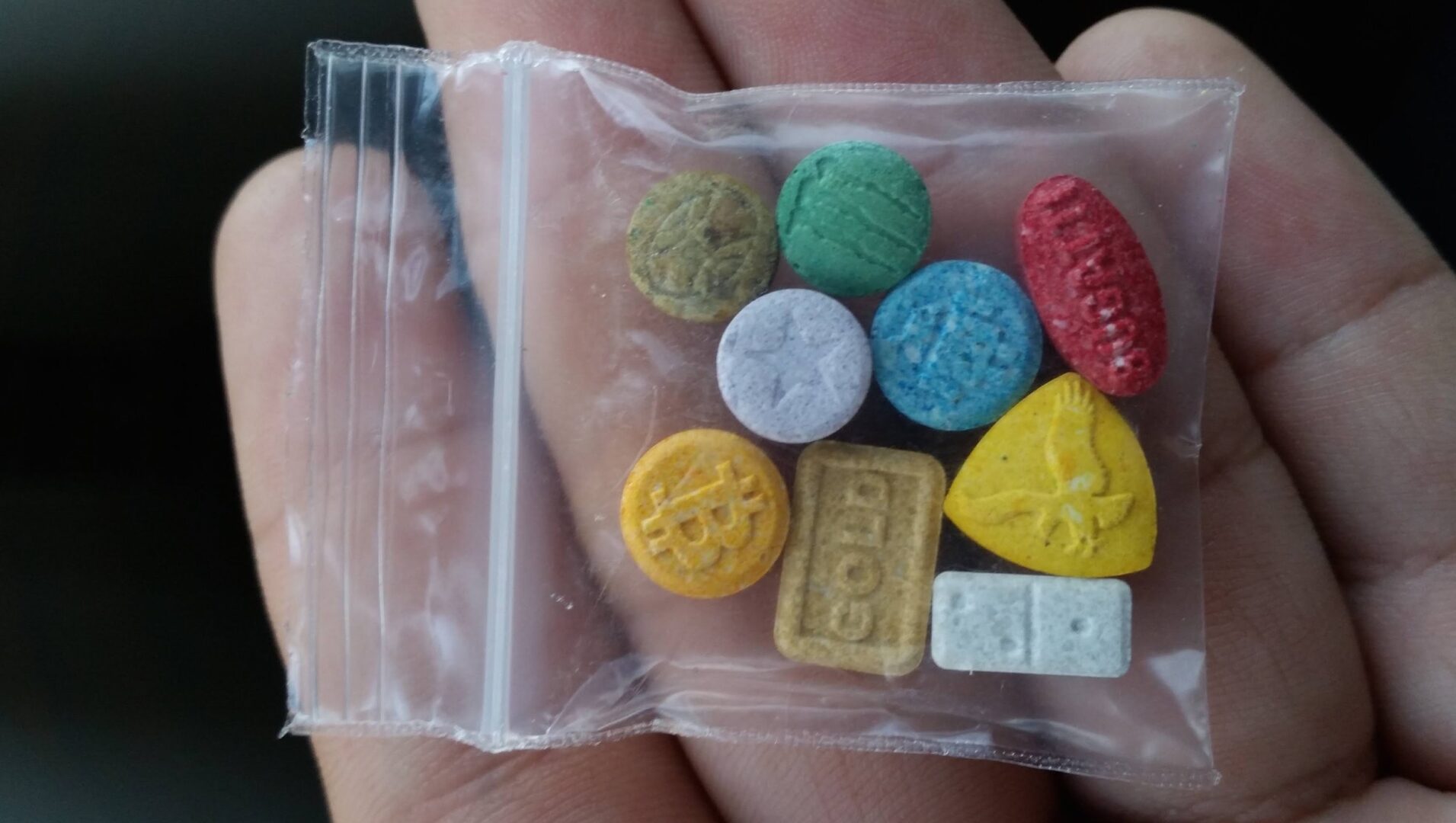 Ecstasy is an addictive illicit drug that contains the active component MDMA (3,4-methylenedioxymethamphetamine). It is a psychoactive stimulant that also has hallucinogenic properties.

Ecstasy is an illegal Class A synthetic (humanmade) drug. Although it is classed as a stimulant drug, it can also have hallucinogenic effects. MDMA ecstasy Molly, Mandy are alternative names for the drug, which is the white powder, crystal-like version of the drug, unlike the tablet or pill that is identified as ecstasy.

There are many pills or tablets, and they usually carry a trademark stamp. With the appearance of sweets or tablets, they often have a harmless impression, but this is far from the truth. Ecstasy has been found to be contaminated or cut with:

Due to the drugs that are often mixed with ecstasy, addiction and dependence are very real possibilities. By itself, it creates very real drug cravings that can lead to a heavy abuse problem or addiction.

Ecstasy has been popular with the music and rave scene since the early 1980s, but in recent years there has been a notable rise in the number of related deaths in England and Wales. (1)

Purity levels within pills have risen considerably – up to 60 per cent in some cases. Other dangerous Class A drugs are also often mixed to make the pills stronger. The effects last longer, and individual brands are more popular. (2)

Popping an ecstasy pill today is a game of Russian roulette – you have no idea which tablets are potentially lethal and which are safe.

If you or a loved one are struggling with the effects of Ecstasy, we urge you to seek professional treatment without delay. Detox Plus UK is here to help you access reputable evidence-based treatment for addiction so that party drugs don’t have to ruin or threaten your life.

How Ecstasy Is Taken

The Global Drugs Survey reported in 2017 that the most common route of administration was oral, with 90% of users administering the drug this way whilst the rest snorted it.

The Law On Ecstasy In The UK

Ecstasy is a Class A illegal drug in the UK, under the Substance Misuse Act 1971. Possession of these drugs can carry a penalty of up to 7 years in prison and an unlimited fine, or both.

Supply and production can carry up to a life term in prison, an unlimited fine, or both.

Driving whilst under the influence carries the same penalties as drunk driving. this drug can seriously impair your decision-making skills, motor skills, sensory perception and reaction. (3) 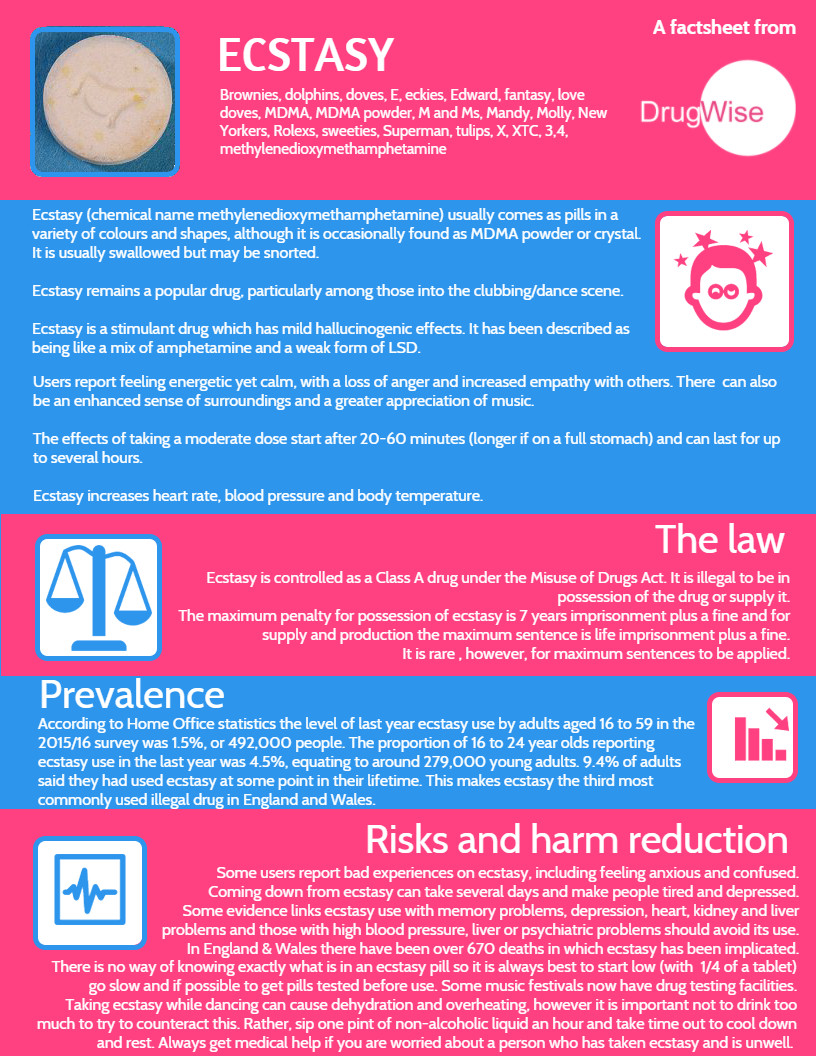 Effects can take between 20 minutes and 60 minutes after ingestion to take effect, longer if you have a full stomach.

Many overdoses happen when an individual takes another pill before the initial dose has kicked in. They make the fatal mistake of thinking that the pill hasn’t worked when the onset of its effects is slower or delayed. The drug has been linked with fatalities and can affect long-term health.

When it works well, the effects will make you feel:

When it goes wrong, it can go horribly wrong and can make you feel:

Ecstasy users appear to feel extremely sensual, which motivates many users to kiss, touch, embrace or hug others. However, it is really not a very sexual drug, and it is common for male users to be impotent while high. Several days after use, users often feel different unfavourable effects. As ecstasy releases serotonin from the brain, it can take days for serotonin to attain average levels again. Throughout this time of the reduction, users often encounter symptoms very opposite to the feeling of ecstasy, including sadness and depression. (5)

Many tablets sold include little to no MDMA and likely large doses of dangerous new chemicals. The contamination seems to be even more widespread in the US as the new most familiar form is now powder called “Molly” in the US and “Mandy” in the UK, which can be blended at any level—by the manufacturer or any dealer on the way.

The main risk associated with taking ecstasy is not knowing what is in the drug or its purity levels.

There have been numerous police reports of super-strength ecstasy pills in circulation in the UK. Taking even half of one of these pills could prove fatal.

There has been a definite trend in drug deaths in the UK over recent years. Drugs have gotten stronger, purer and cheaper. This combination makes taking drugs today highly risky, and abuse is no exception.

Some users have bad experiences. This may involve appearing anxious and panicky, confusion and unpleasant feelings that may, in some way or other, last for days, even weeks. This is more common if users take high doses or are already feeling anxious.

Drug-related deaths have seen a rise again in recent years – similar to the early years of the 20th century when there was a renewed interest in the drug amongst the younger generation. (6)

The Dangers Associated With Ecstasy Addiction – What You Need To Know

Addiction to ecstasy occurs when you lose control of your consumption. This arises from the hunger to use the drug constantly to induce effects of excitement, high energy, euphoria, and increased self-esteem. As an addict, you’ll continue to use the drug despite understanding the dangers that come with it.

The Signs of Addiction

If you are worried a family member or loved one may be using the drug, look out for small coloured pills that resemble sweets in their possession. Ecstasy pills often have imprints of logos or characters on them, representing the particular brand of the pill. Pills also come in an array of different colours. 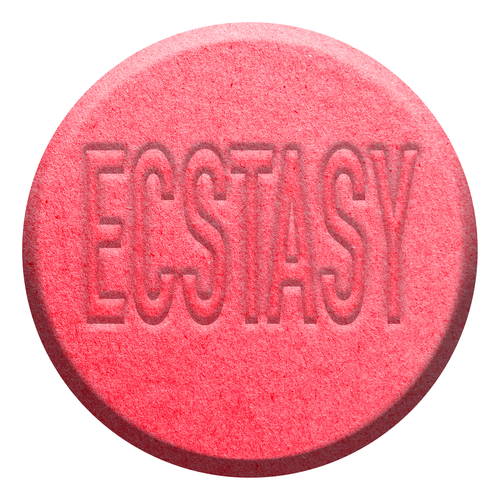 Mitsubishi is a popular brand of pill and, like other brands, comes in different shapes and colours. Occasionally ecstasy is also used in liquid, capsules or powder form.

Signs and symptoms of addiction use include:

Ecstasy is a very addictive drug. Cravings for the drug start as soon as the comedown begins- causing serotonin and dopamine levels to crash.

If you spot the signs and symptoms of abuse in a loved one, it is important not to dismiss it as a phase or as a harmless drug. It can cause addiction, and it only takes one pill to end someone’s life.

Encourage your loved ones to talk to you openly about their drug use to gauge if they have a problem. If your loved one is showing signs of addiction, and there has been a notable change in their behaviour, encourage them to seek addiction treatment without delay.

How Long Does MDMA Stay in Your System?

How long MDMA stays in your system is dependent on several personal factors, the main factors being:

As a general guide, the drug can stay in your system for 3-4 days with light to moderate use. MDMA can be detected in urine for 3-4 days after consumption and 1-2 days in blood. Hair strand tests can detect traces of MDMA for up to 3 months or longer.

Chronic use of MDMA can cause addiction, and a build-up in the body can take weeks, if not months, to be eliminated from your system. 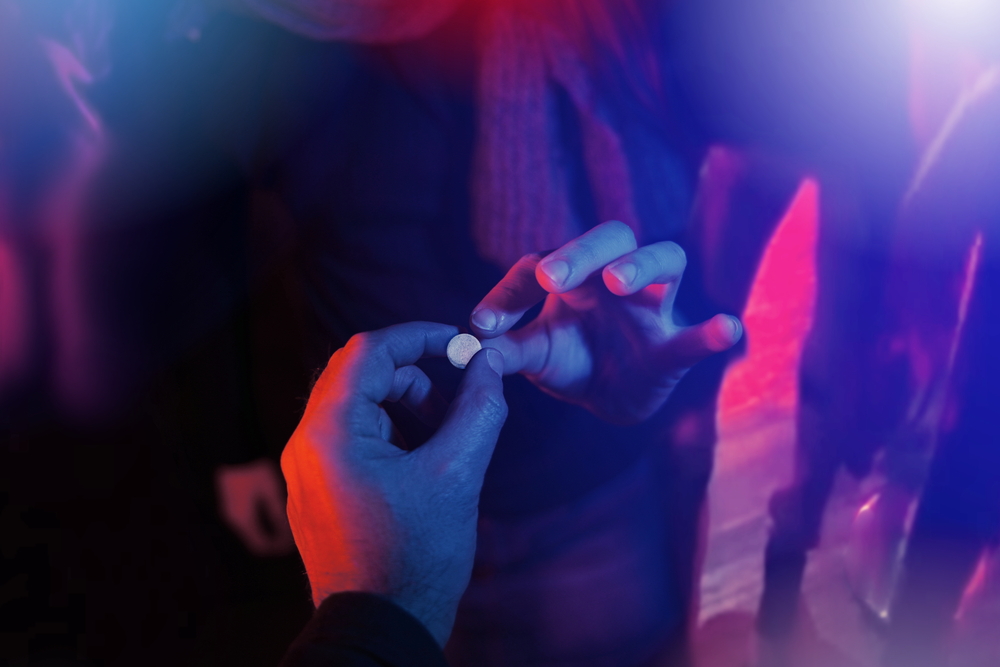 Ecstasy abuse is no different from the abuse of any other drug. As this drug is an illegal Class A drug, any use is considered drug abuse.

However, it is important to recognise that there are different levels of drug abuse and whilst some may abuse the drug purely on a recreational basis, others will take it more frequently, take multiple pills and mix it with alcohol or other drugs.

Basically, the more you take, the greater chance you have of suffering negative consequences and becoming addicted.

When we speak of negative consequences, they can range from mild – regular comedowns and perhaps fallouts with friends and relatives to severe – loss of mental health, relationship breakdowns, loss of jobs, severe financial consequences, sexual consequences such as abuse or rape whilst intoxicated, physical harm and even death.

If you are suffering negative consequences as a result of your drug-taking, it is important to seek professional addiction treatment.

As MDMA is a drug that is mostly used recreationally and classed as a “Club Drug“, recognising an addiction can be difficult because the drug lacks obvious withdrawal symptoms and is often used by young adults in social settings. However, sustained use can lead to psychological and physical dependence.

Some individuals find themselves continuing to take the drug despite mounting negative consequences long after the party has finished.

Stopping abuse can prove very difficult, but staying stopped where there is an addiction present can prove impossible without professional addiction treatment .

What are examples of club drugs?

If you need free drug treatment for addiction, we recommend that you contact your local drug and alcohol services for support and treatment in the community.

Also, it will be helpful to speak to your GP regarding any mental or physical health concerns you have. They can then make the appropriate referrals and arrange any relevant tests and treatments.

Narcotics Anonymous and UK SMART Recovery offer self-help groups and meetings that can usually be accessed locally to where you live. Both offer structured support for drug addiction and help you to quit drugs successfully.

If you or a loved one have an addiction and want help to stop it, Detox Plus UK can advise you on the best private rehab treatment options available in the UK.

We only work with reputable CQC registered drug rehab clinics; that specialise in treating all manner of drugs, including party drugs and club drugs. If you have an addiction, professional drug rehab’s nurturing and recovery-focused environment is the best treatment option available.

The vast majority of addiction rehabs that we work with also provide free ongoing support for families and free aftercare for their patients. Detox Plus UK can also arrange same day rehab admissions for those in urgent need.

For more information on the benefits of drug rehab, details of the treatments involved and the associated costs, please call and speak to us today.

Do You Need Help With?