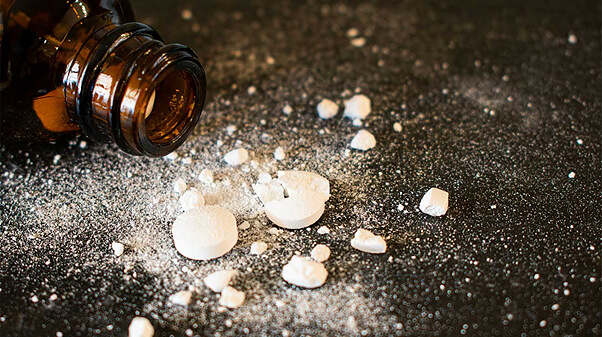 Flakka is a designer drug with extremely powerful stimulants and psychoactive effects. Abuse of Flakka can cause its users to become violent, psychotic and even cannibalistic. Hence its nickname – the “cannibal zombie drug”.

Reports of Flakka first hitting the UK began a few years ago in 2018 when it claimed its first victim by causing a fatal heart attack. Until this time, Flakka was a drug associated with the United States of America, particularly Florida.

Flakka is also known as bath salts, and here’s where the main danger lies. Bath salts is a pretty innocuous term, leading users to believe that it is a relatively harmless “designer” drug. The reality is that the drug is anything but harmless; it is an extremely volatile substance that is unfit for human consumption and is said to be more potent and addictive than the infamously addictive crystal methamphetamine.

Here, Detox Plus looks at the effects and risks associated with taking Flakka. We also offer guidance on what to do if you or someone you love has a problem with this very dangerous drug.

Flakka is a synthetic man-made drug and a banned Class B substance (under the Psychoactive Substances Act 2016) in the UK. Flakka is an active ingredient that is also contained in some so-called “legal highs”, sold under the drug name of  “bath salts”. However, there is a difference between the two as Flakka is known as a drug in its own right and is a newer generation version.

Typically, Flakka has the appearance of small white or pink crystals that look like ‘gravel’ and have a pungent odour likened to cat urine or vomit. Depending on the laboratory, it may also come in a range of other colours as a way of stamping ownership on a particular brand.

Flakka can be smoked, vaped, eaten, snorted or injected and has very powerful effects on the user’s mind causing hallucinations, paranoia, psychosis and extreme agitation.

Flakka belongs to a class of stimulant drugs known as synthetic cathinones and can be purchased very cheaply at the cost of only a few pounds in the UK.

While Flakka is a drug that is not commonly associated with the UK, it does not discount that Flakka abuse is a very real problem for some. Often, Flakka is purchased and used by a person who does not really understand what it is that they are ingesting. Flakka is also sometimes added to other more commonly abused drugs.

Drugs including legal highs and MDMA have been found to have been spiked with the drug to increase their potency. There have also been reports of people purchasing Flakka from the dark web and even social media sites such as Instagram. 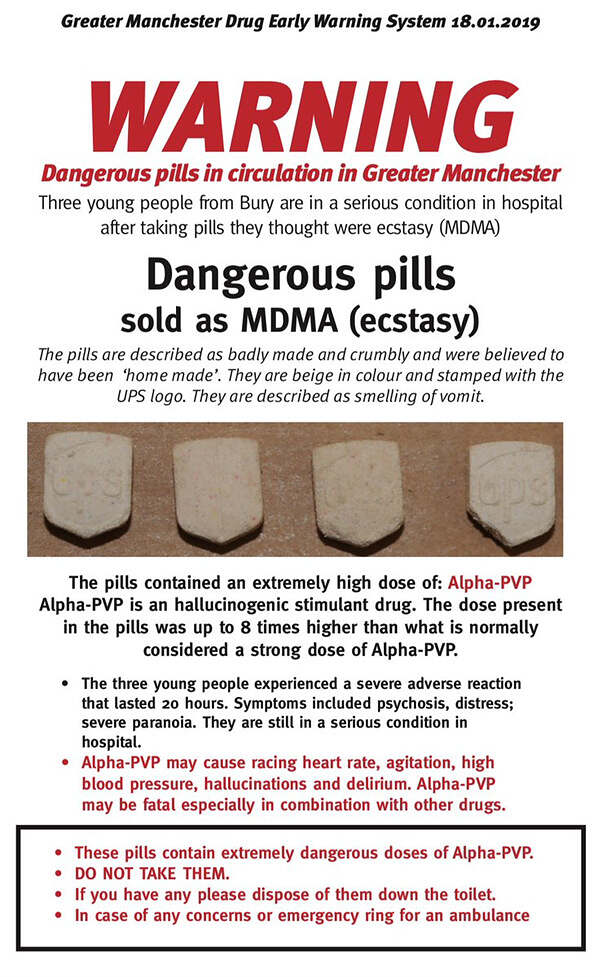 So, what are the main effects of Flakka?, and what does taking Flakka feel like? The main effects are a very powerful euphoric stimulant high, described as an “excited or agitated delirium”. A person under the influence of the drug can display some very strange, bizarre type behaviour due to the powerful hallucinations this drug induces; they may also feel, and even believe, that they are superhuman and have superpowers.

Abuse and even the slightest overdose of this toxic drug can cause death, either from cardiac arrest or from actions undertaken whilst under its psychoactive influence.

Mixing Flakka with alcohol or other drugs will only increase the chances of an overdose; it will also heighten the effects of the drug and increase the likelihood of developing a dual addiction.

How is Flakka used?

Flakka can be used by adding it to tobacco and smoking, inhaling through a vape pen, crushing into a powder and snorting, ingested by eating, or dissolved into a solution and injected.

Bath salts is a broad spectrum term used for a group of man-made psychoactive drugs which mimic the effects of classified banned drugs such as cocaine, amphetamines, crystal meth and ecstasy. Bath salts contain MDPV which is similar to Flakka. Bath salts were originally sold as legal highs and “designer party drugs”, where drug users could get high for a fraction of the cost and without actually breaking the law.

As the first cases of legal high abuse and deaths emerged, the government was forced to act quickly in banning them. However, due to mass production and underground laboratories continually altering the chemical formulas to escape the law, the New Psychoactive Substances Act 2016 was made effective to provide a blanket ban on all legal highs with psychoactive effects.

Chemically and appearance-wise, Flakka and Bath Salts are very similar, except that Flakka lacks a cluster of atoms called the 3,4-methylenedioxy motif. Both Flakka and bath salts have been shown to produce similar effects in users, and both have a very high potential for abuse and addiction.

Flakka has become infamous for the extremely bizarre behaviour exhibited by those under its influence. Examples of this have included reports of people high on the drug committing acts of cannibalism on innocent bystanders, leaving their victims permanently disfigured or left for dead. Other reports have videos of people allegedly high on Flakka presenting in a zombie-like state. It is this extreme, frightening and bizarre behaviour that has caught the media’s attention.

Initially, the Flakka drug was not associated with the UK. However, over the past few years, more and more reports of use are being recorded. The drug claimed its first British victim in 2018; that of the late Andrea Horvathov, who tragically died at the age of 23 of a heart attack at a house party. Andrea was found to have Flakka, amongst other drugs, in her system.

The effects of Flakka

Flakka, a synthetic Cathinone, was developed to mimic the effects of powerful Class A stimulant drugs, including crack cocaine and crystal meth. However, research suggests that it is even more potent and addictive.

The effects of AKA a-PVP are twofold, as the drug works on both the body and the mind. As a CNS (Central Nervous System) stimulant, it speeds up the main functions of the body and the brain. At the same time, it also has powerful effects on the mind. This has led to some people committing serious (sometimes fatal) injury to themselves or others whilst under the drug’s influence.

The effects of Flakka on the body include:

The effects of Flakka on the mind include:

The more a person uses the drug, the more at risk they are of developing life-threatening side effects. They are also at higher risk of developing a potentially fatal Flakka addiction. 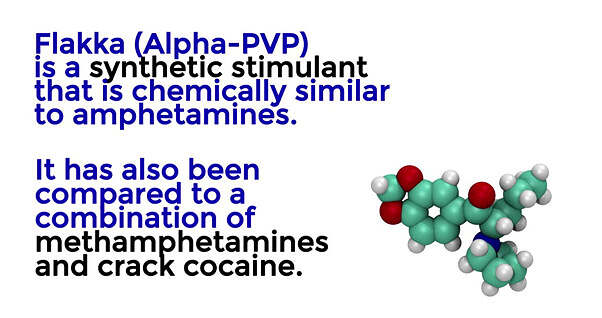 Research into synthetic cathinones shows that Flakka can cause withdrawal symptoms.

Withdrawal symptoms include anxiety, sleeplessness, depression, paranoia and tremors. The drug can also cause tolerance and dependence when repeatedly abused for a period of time.

In animal studies, scientists found that it is even more addictive than crystal methamphetamine, with rats being observed to compulsively and repeatedly press a lever to self-administer the drug as many times as possible.

Crystal meth is widely known to be one of the most addictive drugs available. To find a drug that is even more addictive is really very alarming.

Studies have shown that people who use and abuse Flakka are more likely to experiment with other legal highs, psychoactive drugs and stimulants. It may be abused by a person who grows tolerant to other stimulant drugs and becomes desperate to feel a powerful euphoric high once again. It may also be used as a cheaper alternative by someone who becomes addicted to cocaine.

Abuse can easily lead to overdose and death, especially in a person who has a low tolerance of powerful stimulant drugs. Flakka has been found to be up to ten times stronger than cocaine.

Spotting the signs of abuse

As it is such a potent and dangerous drug, a person addicted to or abusing Flakka is unlikely to hide their problem for very long.

Even a slight overdose can result in some very extreme and disturbing symptoms. However, determining that it is actually Flakka that they are using as opposed to another stimulant drug may not be as easy.

Signs and symptoms of Flakka addiction and abuse include:

Flakka addiction is not a problem one can overcome on their own. Anyone that is exhibiting signs of abuse and addiction will need professional help and treatment as a matter of urgency. Left untreated, a person who is addicted to Flakka is at very high risk of overdose or death by injury or suicide.

Addiction to any stimulant drug is a very serious and life-threatening condition, yet addiction to Flakka is considered even more so due to its potency and high mortality rate.

If you suspect that a family member or loved one is abusing Flakka, legal highs or another stimulant drug, please encourage them to seek professional treatment as soon as possible.

The vast majority of people who suffer from Flakka addiction will require inpatient treatment in order to successfully stop taking the drug. Flakka is extremely addictive, and it is not uncommon for those to suffer from being affected by another co-occurring illness such as panic disorder, paranoia or severe depression.

A person that is addicted to Flakka should not try to quit on their own without medical help, and this can result in rebound paranoia and psychosis.

At Detox Plus, we recognise that abuse and addiction to new generation synthetic “designer” drugs are rapidly growing. As such, we are able to offer a full medical detox for Flakka addiction and a bespoke, comprehensive rehabilitation programme. We treat all addictions with the seriousness they warrant and treat each of our patients as whole individuals.

Detox Plus provides uniquely tailored treatment consisting of the latest in evidence-based addiction treatments. We also professionally and expertly treat any co-occurring illnesses within the same treatment episode. We have found this to be vital to long term recovery.

If you would like to discuss a problem with Flakka in confidence, call us today for a free and confidential assessment of your or a loved one’s treatment needs. We are able to facilitate urgent admissions to an exemplary CQC registered detox and rehab treatment facilities today.

How Long does Mephedrone stay in Your System?