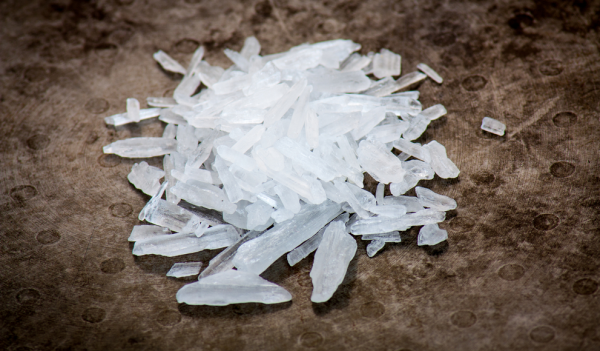 What is Crystal Meth?

Crystal methamphetamine (also commonly referred to as “ice”) is a stimulant that accelerates the brain’s ability to communicate with the body. Crystal meth is far more addictive than the powder form of meth, most popularly known as speed.

Crystal meth has a bitter taste and typically has a strong smell. It also has a small, chunky crystal-like appearance (which is where it derives the name “crystal” meth). It can also take on a brownish appearance as well.

How is Crystal Meth used?

The most popular way of using crystal meth is by smoking it. Because the drug is in smoke form, the user will feel the effects almost immediately. Injecting is another popular way to take the drug, and it typically takes around 15 to 20 minutes before the user will feel its effects. Crystal meth can also be snorted in which case the effects can take approximately 3 to 5 minutes before kicking in.

What are the effects of crystal meth?

Crystal meth is a highly addictive drug that can be hazardous for a first time user. Once it has been taken its effects can last for as long as 12 hours. With that being said users often report insomnia up to a few days after taking the drug.

No two individuals experience the effects of crystal meth the same. These effects most commonly include:

When injecting, a user may experience the following effects:

When sharing needles, additional risks include:

When snorting crystal meth, the nasal passages can be damaged in the process and cause nosebleeds.

Just like most hard drugs, overdosing on crystal meth can be fatal especially when you take too much of the drug at once. If you experience any of the following symptoms call for emergency medical services immediately (if able) as you may be experiencing an overdose. These symptoms include:

Coming down from the high

Where some drugs only take a day or so before the effects wear off, it may take several days before the effects of crystal meth have fully run its course through a person’s body. During this time the user may experience the following effects:

Often users will turn to other types of drugs to help them cope during the “come down” stage. These drugs include cannabis, alcohol, and benzodiazepines. However, more often than not taking these drugs (amongst others) will cause the user to become dependent on both drug types.

Quitting crystal meth is a battle within itself. During this time you will experience the following withdrawal symptoms:

Those who use crystal meth on a regular basis will eventually develop a dependence on the drug. Eventually, they’ll need it to feel “normal” — whether that be socialising with friends, working, studying, or going about any number of normal activities throughout the day.

Those addicted to crystal meth will eventually take less interest in the things that once held their attention. Their moods are often volatile, swinging one way or the next in the blink of an eye.

These changes don’t exist just in the short term. Long-term complications often manifest themselves in the form of depression and anxiety. These effects may even be felt weeks or even months after the last dosage of crystal meth has been taken.

As potent as it is addictive this drug has ruined the lives of hundreds of people. With withdrawal symptoms that range from exhaustion to hallucinations overcoming addiction can be an extremely challenging endeavour. That’s why it’s highly advised that you seek the help of a rehabilitation centre.

Immerse yourself within an environment where you can escape the triggers of the outside world as you cleanse the drug from your body. Reach out today so we can match you with a rehab clinic to get your mind back on track.

Why is Crystal Meth Addictive?

What is the Definition of Drug Abuse?

Why is Crystal Meth Addictive?

Even from the first time someone uses meth, the high is significant, and the brain registers that experience as a “hard-coded” memory.  The brain tries to recapture those same feelings that were experienced with the first use, which is usually impossible. Your brain readjusts to meth use almost immediately, which means that more and more of the drug is needed each time to obtain that initial high. This leads to severe meth addiction, which has some alarming and distressing effects on your body and mind.

What Happens When You Mix Meth and Alcohol?

When used separately, both meth and alcohol can be dangerous, but when used together, their effects can become even more dangerous. They can even be lethal. After ingesting both of these substances, the chances of alcohol poisoning and meth overdose escalate. These risks are accompanied by deadly side effects like shallow breathing, seizures and cardiac arrest.

Do you need help with?